Two Moms, Twin Boys and a New Sibling On the Way!

When Ira Hardy and her wife Malinka of San Diego chose a PRS donor in 2009, they had decided Ira would be the first to become pregnant. Little did they know just how much the decision to start a family would transform their lives until they learned Ira was carrying not one but two babies.

Today, I’ric and My’ric – identical twins now three years old – are active little guys in pre-school and their parents are long recovered from the first early, sleep-deprived days. So recovered, in fact, that Malinka is now pregnant with their third baby, using the same donor. Like Ira, Malinka also received her insemination services at PRS’ Pasadena medical office.

“It was great – we both got pregnant on our first try,” says Ira. “But we were very careful in tracking our ovulations. When we were told that that I was carrying not one baby but two, our jaws dropped. Malinka actually dropped her pen. I think both of us thought – well, what do we do now? But I’m kind of an easy-going type so I just kind of went with it.”

Legally married in California, Ira and Malinka have been together for almost seven years. “Basically, we wanted to follow a traditional path – get to know each other well and then be married before we had children,” Malinka comments.

Ira is an E6 with the Navy and the twins also attend pre-school on the base. Ira says her colleagues have been supportive of her relationship. Malinka is an accountant but for the time being is the stay-at-home mom.

Malinka says they chose Pacific Reproductive Services after researching several sperm banks online. “But they were the first one that really caught my eye because they said they catered to lesbians,” Malinka says. Ira and she were also happy to have both a video interview and photos of the donor available.

“The video of our donor – who is willing to meet the boys when they reach 18 – was important to us,” comments Malinka. “We very much liked his reason for becoming a donor, to help women become parents. And he’s in college and he’s a handsome guy - his father is African American and his mother is Japanese.”

As for her current role as stay-at-home mom for the twins, plus carrying a baby herself, Malinka says she’s okay “as long as I can keep my eyes open.”

“I was an only child, so to hop into kids with twins was certainly quite an experience,” she comments. “I’ric is kind of the take charge brother although they are very similar. They’re both smart - their teacher calls them little Einsteins. Our hope for them is that they just become good citizens, make us happy and be happy themselves, and succeed in what they want to do.”

About their experience at PRS, Malinka says everybody was very supportive. “They talked us through the whole procedure, which made us comfortable. It’s a blessing PRS is around.” 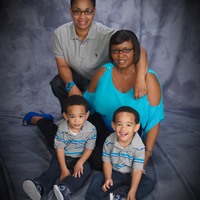 Ira and Malinka with their twins,
I’ric (left) and My’ric (right)

“It was great – we both got pregnant on our first try. When we were told that I was carrying not one baby but two, our jaws dropped. Malinka actually dropped her pen. I think both of us thought – well, what do we do now? But I’m kind of an easygoing type so I just kind of went with it.” 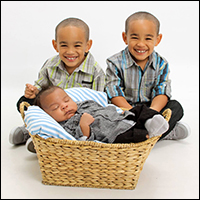 And now there are three. Malinka has given birth to a new brother for I'ric and My'ric - Malichi - using the same PRS donor as for the twins. And she and Ira thought they were a bit tired before! Congratulations to the whole family.