How to Time your Inseminations

Demystify the process of ovulation and when to inseminate

By taking the time to learn about your menstrual cycle and how to predict ovulation, not only do you increase your chance of becoming pregnant faster, you can save both time and money and feel more in control of the process.

Timing is everything when it comes to getting pregnant

About the menstrual cycle and ovulation

A menstrual cycle is counted from the first day of one period through the day before the next period. The average cycle is about 28 days long but can range anywhere from 21 to 35 days. Some degree of irregularity in the menstrual cycle is normal.

Ovulation refers to a specific phase of your menstrual cycle when an egg is released from your ovaries. The egg is then swept into one of your fallopian tubes and carried toward the uterus over the next several days. For conception to occur, the egg must be fertilized by sperm in the fallopian tube within about a day of ovulation.

How to detect ovulation

Ovulation can best be predicted at home by using an Ovulation Predictor Kit (OPK). It also is helpful to track your Basal Body Temperature (BBT) for several cycles before you begin inseminating, combined with a "dry run" of using the OPK (see the example at the end of this section). These methods help you determine your approximate ovulation ahead of time, familiarize you with your cycle patterns and maximize your chances of having a well-timed insemination when you begin.

Ovulation predictor kits test your urine for a spike in the level of luteinizing hormone, which causes ovulation to occur within a day or two (this spike is referred to as the LH Surge). A positive test indicates that ovulation is likely to occur within the next twelve to 36 hours.

Some important things to know about using ovulation predictor kits:

First Response is available at most major drug stores and other retailers. It is a 1-step LH ovulation predictor test that yields results in about 5 minutes. Each kit comes with 7 tests. PRS does not recommend using the 20-day test product. For more information go to: www.firstresponse.com.

These test kits are recommended because they are more specific to the LH surge than other products. A PRS clinician will carefully review OPK testing during your intake appointment.

With artificial insemination using sperm that has been frozen, it is particularly important to time the introduction of sperm as close as possible to ovulation. Once the egg is released - normally about 12 to 36 hours after the OPK is first positive - the egg must be fertilized within about 24 hours for pregnancy to occur.

Sperm that has been frozen is estimated to live in a woman's body for about twelve to 24 hours, therefore, we recommend doing an insemination the day your OPK is first positive and again the following day in order to maximize the chances of sperm arriving in the vicinity of the egg when it is released.

Basal Body Temperatures are a way of looking retroactively at your cycle patterns, including your cycle length and likely ovulation window. It is not a useful tool for predicting ovulation in your current cycle, however.

A woman's basal temperature (the temperature of your body upon first awakening) rises by about 1/2 to 1 degree over the first one to three days after ovulation, due to the release of the hormone progesterone. Note in the example Basal Body Temperature (BBT) Chart below that the woman's temperature increased significantly on her cycle day 14. This indicates that she most likely ovulated on her cycle day 12 or 13. The BBT allows you to look back at the temperature graph of your previous cycles to see when you typically ovulate and also to document the usual number of days in your menstrual cycle. Knowing this will help you know when to expect your OPK to be positive when you start your first cycle (see below). Instructions for how to take and chart your BBT are included with our downloadable BBT chart (or you can use the interactive BBT chart found on the website www.FertilityFriend.com). Please make a separate chart for each cycle. Should you chose to use the BBT charts, we can review them with you during your introductory session, either in person at our San Francisco or Pasadena medical offices or by telephone. 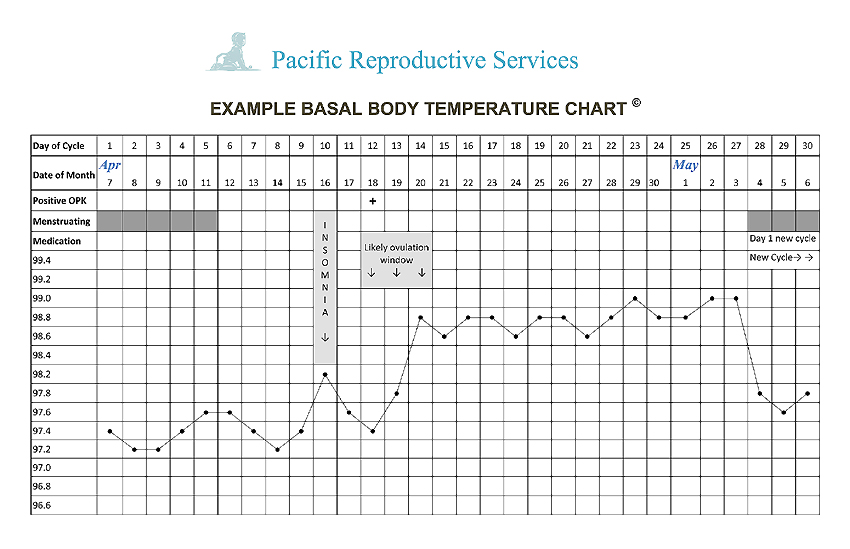 "I love the "woman-centric" demystification approach (at PRS). Not sure that other banks do an initial consultation. It helps a lot to understand what the process is and how to prepare - i.e., basal temp charting, ovulations tests, etc."